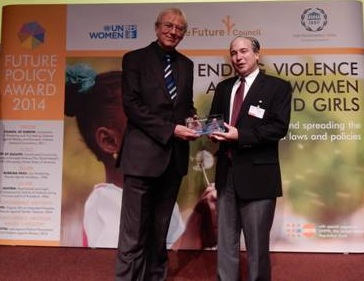 Duluth, MN – On Tuesday, October 14, the Duluth Model’s “Coordinated Community Response to Domestic Violence,” a partnership between Domestic Abuse Intervention Programs (DAIP), and criminal justice agencies of the City of Duluth and St. Louis County, was named world’s best policy. Out of 25 international nominations, the “Duluth Model” was the only policy to be awarded the 2014 Future Policy Award for Ending Violence against Women and Girls, or Gold Award. The Future Policy Award is the only international award which recognizes policies rather than people, and the “Duluth Model” is the first humanitarian policy to be honored in the history of the award.

“This is a great honor,” said Rep. Michael Paymar. “We never imagined the global impact that the Duluth Model would have, but more importantly how many lives would be saved.”

The “Duluth Model” won the Gold Award for prioritizing the safety and autonomy of survivors while holding perpetrators accountable through community-wide coordinated response, including a unique partnership between non-profit and government agencies. This approach to tackling violence against women has inspired violence protection law implementation and the creation of batterer intervention programs in the United States and around the world, including in countries such as Austria, Germany, the United Kingdom, Romania, and Australia.

“What I love about this award is that it celebrates our policy and model to end violence against women. By giving the recognition to the policy we hope that it will be replicated worldwide,” said DAIP executive director (also executive director of Advocates for Family Peace (AFFP)), Melissa Scaia. “While DAIP continues to lead this work it couldn’t happen without the commitment of local leaders and their staff.”

On November 25, 2014, the International Day for the Elimination of Violence against Women, the World Future Council and its partners, UN Women and the IPU, will host an interactive panel discussion on the preconditions of successful policy-making and implementation at UN Headquarters in New York. Policy-makers from Austria, Burkina Faso, the Council of Europe, and Minnesota, including Melissa Scaia, Executive Director of DAIP (and AFFP) and Rep. Michael Paymar, will participate.

More information on “the Duluth Model”, the award and the other winning policies can be found at: www.worldfuturecouncil.org and www.theduluthmodel.org